“If you find yourself struggling in life, pray to God. Pray with sincerity and belief. Take as long as you need to. And you will have hope.”

Somewhere instinctively within Joe was a humble desire to build on his faith and embed the Gospel values into his day to day life. The quote above came from Joe himself in September, 2009 and encapsulates his wholehearted Faith in God. Years on from his death, Joseph Wilson continues to inspire others in his legacy to always show kindness, humility and love for others.

Joseph Wilson was born on the 12th of December 1994 and he passed away on the 20th of December 2011 at Wishaw General Hospital five days after his 17th birthday. Joe grew up in Carfin. He lived with his parents Alan and Veronica Wilson and his younger sister Angela who he treasured greatly. Joe attended Our Lady and St Francis Primary school before going to Taylor High in his final years. After his death, his father discovered diary entries that Joe had created over his teenage years. In quotes dated back to when Joe was just 14 years old, his words stood out due to the academic and mature style which seemed somewhat unusual for his age. With the help of staff from Taylor High, a book titled “Joe’s Words” was created filled with his visions, quotes and story.

Joe talks honestly about his feelings and connection to his faith, including times when he desperately wanted to feel closer to God. His writing captured the attention of people from all over the world who took inspiration from his admirable dedication to his faith and his determination to strengthen his relationship with God. Joe worked hard to feel close to God. His written words are incredibly wise, reflective and focused on his intrinsic desire to pray and show unconditional love and kindness towards others.

Indeed Joe’s strong connection to God was always apparent. In high school, Joe was proud to attend the Pope Benedict’s visit to Bellahouston Park in Glasgow. On the day of this, Joe wrote about the joy he felt and that his faith was growing. As well as contemplating his RE lessons throughout school in his diary entries, Joe also reflected on the rewarding aspects of following God, putting others first and praying fervently. Joe’s admirable dedication to attending mass and praying for others has in turn inspired his friends and family to remain close to God, even during the times of pain and suffering that emerged from his tragic death.

Joe lived very close to Carfin Grotto – a pilgrimage centre and shrine to Our Lady of Lourdes- and this became an important part of his faith journey. Joe would often visit the Grotto both with family and on his own. He viewed it as a special and sacred place; a peaceful sanctuary for prayer and reflection. Joe dedicated many prayers to others during the time he spent there and was particularly inspired by Saint Therese of Lisieux after learning about her strong faith and desire to help others. Undoubtedly, Joe’s family and friends were motivated by Joe’s desire to help others and in a legacy for Joe, a huge event was planned after his death. Hundreds of people climbed Ben Nevis to raise funds for various charities including the British Heart Foundation, - a charity fitting for a young man who although died from a sudden heart condition, had the warmest and most memorable heart and soul.

Even now, the Grotto serves an important link to Joe. When Joe was in a coma, hundreds of people gathered there for a candle lit prayer and procession in the hope that he would recover. The sense of community and goodwill radiated Joe: a person who would always do anything he could to help others and make everyone feel valued and appreciated. The sheer amount of people who attended this reflected their fondness of Joe and in turn, their desperation to keep him with us on Earth.

Despite this, God had other plans for Joe.

Today, the Grotto offers his family and friends the same peace and tranquillity it once offered Joe. Near the shrine to Our Lady of Lourdes and Saint Bernadette, is a plaque dedicated to Joe where friends and family can go to pray and remember him. Furthermore, extracts from Joe’s diary entries - “Joe’s Words” - was given to the centre by Joe’s family for visitors to take home snippets of Joe’s inspiring perspective. Since then, this book has travelled to many countries and has influenced countless people from all walks of life.

Joe’s gentle, caring nature was noted by everyone who met him. No matter what, a smile or a trademark ‘Joe hug’ would brighten up the day for many of his friends and family members. Joe had a way of making everyone feel important, valued and special. Always upbeat and positive, Joe’s warm energy was infectious and commented on by many. He found ways to connect with people from all religions and cultures. Today, Joe is inspiring more people than ever. On Earth, Joe’s mission was to help others and he had planned on becoming a doctor; a profession he would have been very successful in. Remarkably, this mission has not changed. The role he plays in many people’s lives today mimics his desire to help others on Earth. In death, Joseph Wilson still continues to help strengthen the faith of others and his legacy inspires us to live more like Jesus and think the best of people. 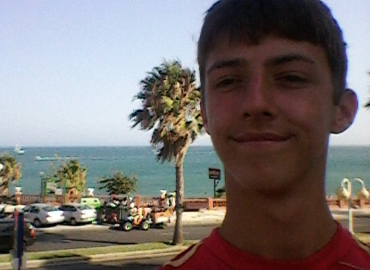